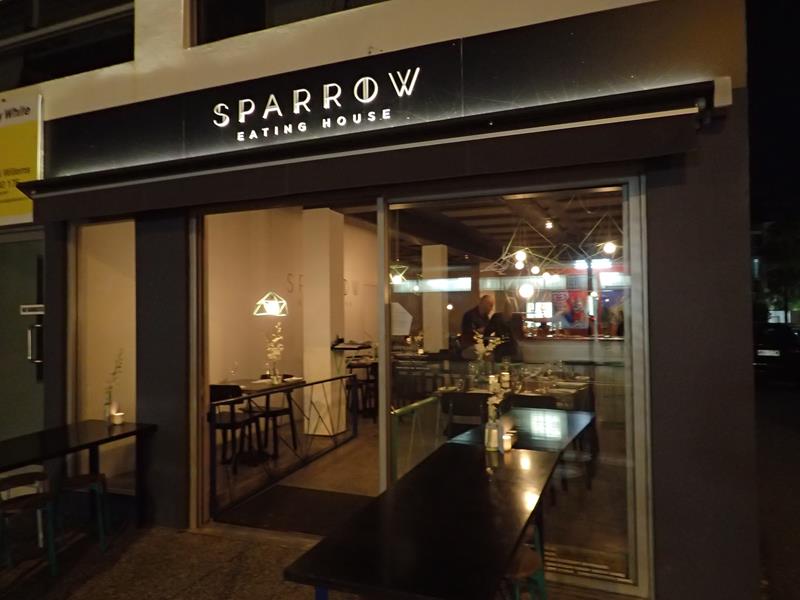 Sparrow Eating House is a nondescript restaurant, if anything it could be categorised as ‘modern Australian’. I would describe the decor inside as nondescrpipt as well, a bit bland, lacking any character. They seem to be saving costs on electricity making the restaurant a bit dark, making it very difficult to read the menu. We had to pull out our mobile phones to shine some light on the menu to see what was on offer. I guess the dark lighting takes away from the boring decor.

The menu does not have entrees and mains, just small dishes which are designed to be shared between 2 people which makes it a bit hard to share if you are dining in a group of 3. Our waitress suggested that we would need to order 6 dishes which would be shared between the 3 of us. We ended up ordering 5 which was just enough although the servings are quite small. At the top of the menu it was titled the Autumn Menu so I presume they only change menus every season.

We dined there for dinner and the menu consisted of various vegetarian and non-vegetarian dishes including the five dishes which we ordered which were the slow cooked beef cheeks with classic mashed potato, Plum and cider braised Byron Bay pork belly with house slaw, Dukkah Lamb shoulder with Moroccan chickpeas and za’atar yoghurt, Tempura soft shell crab with a blistered heirloom tomato and ricotta salad and a side dish of the organic fried potatoes with harrisa mayo.

It only took a few minutes for the first 2 dishes to come out, the lamb and the soft shell crab. The lamb was very bland, it had been slowed cooked so the meat fell apart but just lacked flavour, the chick peas didn’t add any value to this dish though they did dominate the dish in quantity. The soft shell crab was not much higher on the flavour scale.

We had finished the first 2 dishes and had to remind the waitress that we had ordered the potatoes as a side dish. They came out with the last 2 dishes, the beef cheek and the pork belly. The beef cheeks was probably the high light of the meal, a rich sauce and a big chunk of beef cheek which was very tender (the dish is very small!). The pork belly was the low point of the meal. The pork belly was just luke warm and the pork crackling had no crack! This was not cooked well at all with loads of slimy pig fat all through the cut of meat. We had got in right at 6pm and the restaurant was empty when we arrived so they could not have been busy when we placed our order. For the pork belly to be under-cooked is inexcusable!

Overall the 3 of us were very disappointed. We had read loads of good reviews before we went to dine. The food was very ordinary and the service was not much better. The waitress was friendly enough though we had waited a while when we sat down for her to come and ask if we wanted to order drinks. We had all finished our drinks and had to get her attention to order more.

With some of the best restaurants on the Gold Coast just around the corner (ie Hellenika) it is a wonder how long this little eating house will survive. The restaurant does not have it’s own website so hard to see what their current menu is like until you go in. At a cost of around $150 per year to have your own website this must be another cost saving exercise like the low lighting they have!

If you have a different opinion to this we would like to hear your experience – just post your review below.

Check out other Gold Coast Restaurants