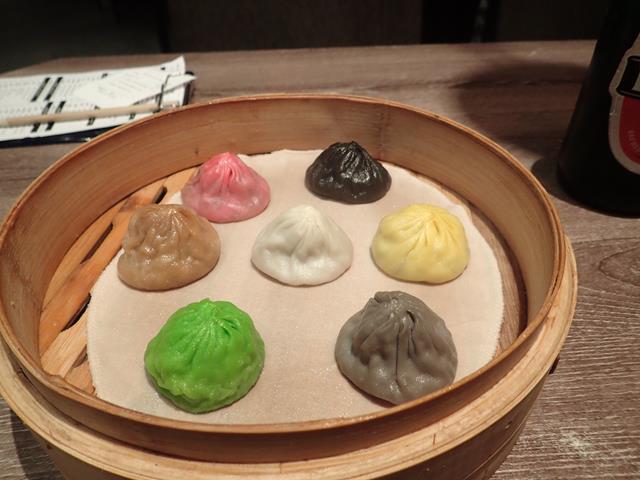 Paradise Dynasty Chinese Restaurant (Legend of Xiao Long Bao) is located on the ground floor of the Beach Walk Shopping Centre directly across from Kuta Beach in Bali, next to the Sheraton Hotel. Paradise Dynasty has a range of Chinese food though they specialise in 2 dishes, Shanghai Soup Dumplings (Xiao Long Bao) and hand made noodles (lamian) which is made by the chefs in the open kitchen by repeatedly stretching the dough to make fine thin noodles.

I went in for dinner at Paradise Dynasty Chinese Restaurant to try both the soup dumplings and the hand made noodles. There are different flavoured Shanghai soup dumplings with a choice of pork or chicken fillings. The flavours of the dumplings include Foie Gras, Ginseng, Black Truffle, Garlic, Crab Roe, Szechuan, Cheese. You can order a basket of 6 pieces or 10 pieces of any of these flavours or you can go with a mix, the Signature Dynasty which is a basket which comes with 8 different flavoured dumplings.

With the steamed dumplings comes a small plate of sliced ginger. Also on the table is  pot of Shanghai vinegar and some chilli paste. The correct way to eat the dumplings is to load one of the dumplings on your large spoon, top it with some slices of ginger and pour a little bit if the vinegar on top. Pop it in your mouth and experience the soup explosion in your mouth.

The dumplings at Paradise Dynasty are delicious. You can see into the kitchen and watch the chefs make each dumpling by hand. Other times I have eaten Xiao Long Bao, often when you pick up the dumpling the bottom tears open and the soup inside pours out before you get it in your mouth. Not at Paradise Dynasty. Each dumpling I ate was well made and did not tear so it made it to my mouth and I had that wonderful burst of soup when I bit into the dumpling. Delicious!

I polished off the 8 dumplings and then got stuck into a nice big bowl of noodle soup. I had ordered the La Mian with stewed beef brisket. You can either have this noodle soup spicy or not spicy. I went for the spicy and this was no joke. When the bowl arrived I saw a huge lump of chilli paste sitting ontop of the noodles and soup. I mixed this in with the soup and started eating the delicious noodles. I do like it spicy but this was mega spicy. I devoured the noodles which were so fine and soft. The beef brisket just fell apart which I mixed in with the noodles. When I finished the noodles I couldn’t eat much of the soup and the chilli was just too spicy. Still a great bowl of noodle soup.

Also check out The Best Shanghai Soups Dumplings in Tokyo