Scott Posted on January 5, 2020 Posted in Flight Reviews No Comments 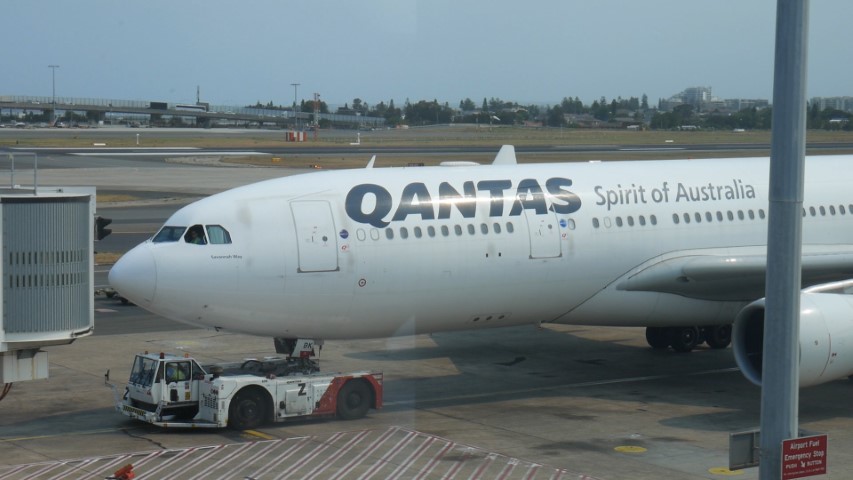 Qantas fly from Sydney to Bali once a day, leaving Sydney at 4.50pm AEDT and arriving into Bali at 8pm.

There are plenty of options on this route between Sydney and Bali. As well as the Qantas flight, you can also to choose to fly with Jetstar, Virgin, Garuda and Malindo Air.

Flight time between Sydney and Bali is around 5.5 hours.

The particular Qantas A330-200 for my flight was the plane named ‘Savannah Way’ rego VH-EBK which is just on 12 years ago, joining the Qantas fleet in 2008.

The Qantas Check-in area is at Row C of Sydney International Airport. The check-in process is fully automated with electronic kiosks which you insert your passport, confirm your flight and the machine prints out your boarding pass and luggage tags.

You attach the luggage tag to you bag and take it over to the automated bag drop, scan your boarding pass and off goes your luggage to be loaded onto the plane.

At the back of the check-in area is a service desk if you have any issues with checking in or have queries for the staff.

With a pitch of 31 inches, I had enough space between my knees and the seat in front. The seat pocket was loaded up with an iPad (entertainment unit) and the Qantas in flight magazine. Once you take the iPad out, this gives you a tad more leg room.

As this is mostly a day flight, leaving Sydney at 4.50pm and arriving into Bali at 8pm, I didn’t sleep so was generally comfortable on the flight. The seat reclines back only a few inches but enough to stretch out a bit and watch a couple of movies. I did nod off for a short while.

The plane used for my flight, the plane named ‘Savannah Way’ rego VH-EBK, does not have seat back entertainment screens. Instead in the seat pocket when you get on the plane, there is an iPad which is configured with the Qantas entertainment system which has loads of latest release movies, some classic movies as well as TV shows and documentaries.

The iPad entertainment system also has a flight map so you can track the progress of the flight.

There is an attachment in the seat in front which allows you to mount the iPad which puts it in a great position to watch, just like a proper seat back entertainment screen. Though during take-off and landing you need to take the iPad down from this attachment. Also the entertainment system seems to be controlled centrally on the plane. As the plane was descending into Bali, they turned the entertainment system off which was annoying as I had 5 minutes left to watch of a movie so missed the ending! First world problem!

Next to where the iPad gets mounted, there are 2 USB ports, 1 is for plugging in the iPad, the other you can use to charge your electronic devices like your mobile phone or tablet.

In the seat pocket is also a copy of the excellent Qantas inflight magazine which has some great travel articles and loaded up with advertisements.

1 meals was served on this 5.5 hour flight. In Economy there was a choice of 3 different dishes. A vegetarian dish, a chicken dish and the one I chose, the beef and mushroom ragout with pasta. The meal was served with a piece of foccacia bread and some tasty cheese and crackers. A satisfying meal!

A drink was served with the meal. Beer, wine and spirits were available but I just chose a classic Coca-Cola to have with my meal.

After the meal was completed, the crew came around and handed out dessert which was a Weis dairy free coconut and raspberry bar. They also served tea and coffee.

Not a bad meal for economy class. Nothing too exciting but all tasted good quality.

Apart from the welcome on-board, and the crew serving dinner, there was not much interaction with the crew. They all seem nice enough but being a short flight, I didn’t need anything else but the meal service.