The Avenue of Stars Hong Kong 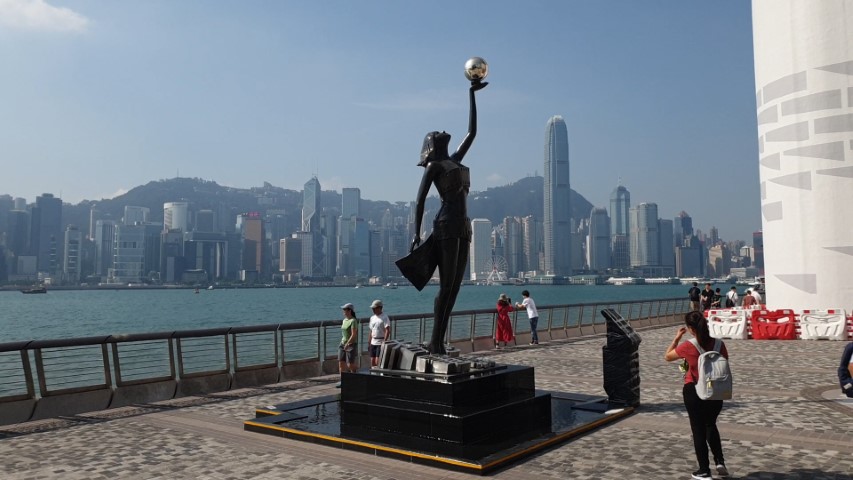 The Hong Kong file industry is one of the biggest film industries in the world. In 2018 they made 53 movies. That’s one per week and one left over.

Right along the boardwalk are hand prints of the actors and the singers and the producers and the directors from the Cantonese movies. Out of the more than a hundred hand prints is probably only five that I know. I know Bruce Lee, Jackie Chan, Jet Li. Michelle Yeoh and I know one director caught John Woo.

Check out our video of Avenue of Stars Hong Kong

John Woo made a heap of movies with Bruce Lee and Jackie Chan and made some Hollywood blockbusters like Face Off and Mission Impossible 2 with the little Tommy Cruise. There is also hand prints from Raymond Chow who is one of the fathers of the Hong Kong film industry. He founded Golden Harvest in 1970 and started producing a lot of Kung Fu movies along with movies with Bruce Lee.

Sadly for Bruce Lee they didn’t capture his hand prints so they just have a little plaque with a feature of his face.

Right at the end of the Avenue of the stars is the number one attraction, the statue of the Bruce Lee. Read more about the Bruce Lee Statue.

Now this is a very pleasant part of Hong Kong to visit. A nice promenade along the harbor front, great views across to Hong Kong island, good for visiting during the day or at night time.

How to get to Avenue of the Stars

It’s easy enough to get over to the Avenue of Stars. If you’re on Hong Kong Island just come down to the Central Ferry pier number 7 and there are regular ferry services across to Tsim Sha Tsui on the Kowloon side of Hong Kong.

The ferries across to Tsim Sha Tsui or TST for short have a lower deck and an upper deck. The upper deck has a better view and the tickets cost a little bit more.

There are vending machines that you just pop in your coins or pop in your notes and out pops the ticket.

It only takes around 5 – 8 minutes for the ferry to cross from the Central Ferry pier across to Tsim Sha Tsui.

Even if you you’re not into Cantonese movies it’s still worth coming over to this nice boardwalk along the harbor front, the best
place in Hong Kong to check out the harbour and across to Hong Kong Island.