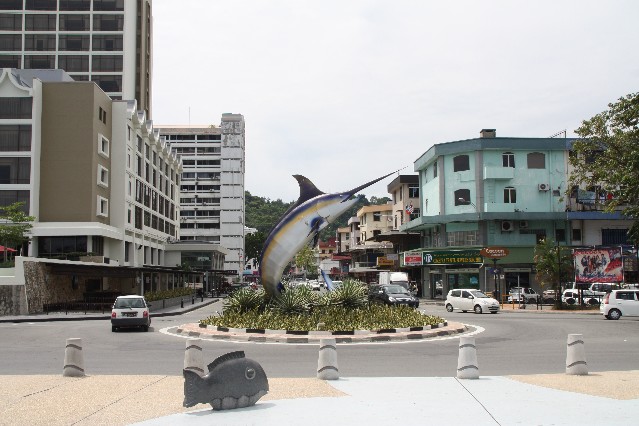 Kota Kinabalu is the capital city of Sabah East Malaysia. Located on the northern coastline at the foot hills of Mount Kinabalu. Sabah is referred to as Land Below the winds because of it is located below the typhoon belt which it is protected, making the weather in Sabah pleasant all year round.

Sabah Museum is located on the grounds of the former British Colonial Governor’s Residence. The museum was built in 1985 with the main building built to resemble a Rungus longhouse. On display is a collection of traditional ethnic costumes, musical instruments and various artifacts from the many ethnic communities of Sabah.

Atkinson Clock Tower was built in 1905 by Mary Edith Atkinson, the mother of the first District Officer of Jesselton, Francis George Atkinson who died at the age of 28 of ‘Borneo Fever’ – malaria. The clock tower was originally built of miabau wood though has been restored many times. The lights of the clock tower were used for navigation by local ships coming into port though now it cannot be seen from the water because of the tall buildings in Kota Kinabalu.

Just off the coast of Kota Kinabalu are some beautiful tropical islands with excellent coral reefs for snorkeling or scuba diving to view the wide variety of marine life. Some of these islands include Gaya Island, Sapi Island, Sulug Island and Mamutik Island.

Along the waterfront of Kota Kinabalu are the local markets selling a range of fresh fruit and vegetables, fresh and dried fish, nuts and other food products.

Just along from the food markets is The Waterfront Complex which has a number of restaurants including seafood, Indian, Thai and an Australian BBQ Restaurant and Bar. There are also a number of bars open until late at night. This is the best place to come late afternoon and sit back and relax and watch the beautiful sunsets which are common in Kota Kinabalu.

Australia Place is located close to the centre of Kota Kinabalu. This is the street that the Australian soldiers camped in when they landed in Jesselton in 1945 at the end of the second war. Now Australia Place has a number of backpacker hostels and hotels and has the downtown Police Station.

Puh Toh Tze Temple is a Buddhist temple located just a few minutes down the road from the Kota Kinabalu City Mosque, located off Tuaran Road. The temple was built in 1980. There are ten large statues of deities leading up to the temple including Kwan Yin, the Goddess of Mercy. There is also a large statue of the Buddha standing.

From Kota Kinabalu there are several places to go see the Borneo Orangutan. The closest place from Kota Kinabalu is Rasa Ria or you can fly or catch a bus across to Sandakan to visit Sepilok which has the Orangutan Rehabilitation centre.