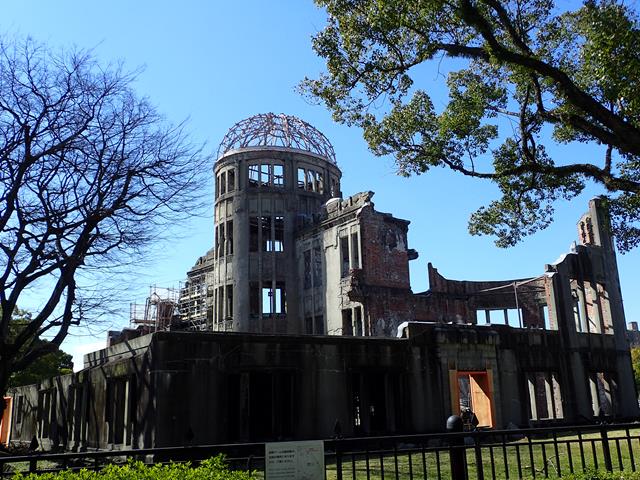 Hiroshima is located in the west of Japan, a city with a population of around 1 million people. This is one of the my favourite cities in Japan. There is so much to see and do and the food is fantastic. Hiroshima really deserves a visit of atleast a few days to take in all the tourist attractions.

Check out the most popular tourist attractions in Hiroshima:

One of the main images associated with Hiroshima is the gloomy Atomic Dome, the building that survived the nuclear blast at the end of World War II that devastated the city of Hiroshima which back then had a population of several hundred thousand people. It was 8.15am 6th August 1945 when the blast occurred about 600 meters above the ground, around 160 meters away from this building, the Hiroshima Prefectural Industrial Promotion Hall.  Most of the walls and the iron ore dome at the top of the building survived and has been left as a reminder of this tragic event. This building became known as the A-Bomb Dome.

The hypercentre is the exact spot that the nuclear blast occurred over Hiroshima. Located around 160 meters away from the Atomic Dome, the spot is located in the back streets of Hiroshima. At the hypercentre is just a small memorial with a plaque on it describing the events. On top of the memorial is a small bouquet of flowers.

This is the spot that the first atomic bomb used in war by mankind. The explosion happened around 600 meters above this spot and the ground was hit by heat rays of between 3000 to 4000 degrees Celcius. Most people in this area were killed instantly and majority of buildings were completed destroyed.

Hiroshima Castle dates back to 1591 when it was built by Terumoto Mori, a feudal lord. The entire castle was completed destroyed by the Atomic Blast and was rebuilt 1958. The entire site has been declared a national historic site. Entry into the Hiroshima Castle grounds is free.

This is the place to come to eat the best Okonomiyaki in Hiroshima. This 5 story building has lots of small stalls that only cook Okonomiyaki (Japanese omelette). Running for other 50 years it has become a tourist attraction as well as still very popular with locals. Read more about Okonomi-mura.

Toshogu Shrine dates back to 1646 built by Mitsuakira Asano, lord of Hiroshima. The shrine was another victim of the Atomic blast, burning down ignited from the explosion. The shrine was rebuilt in the same architecture design common for the Edo Period 17th Century.

Airlines that fly from Tokyo to Hiroshima include: