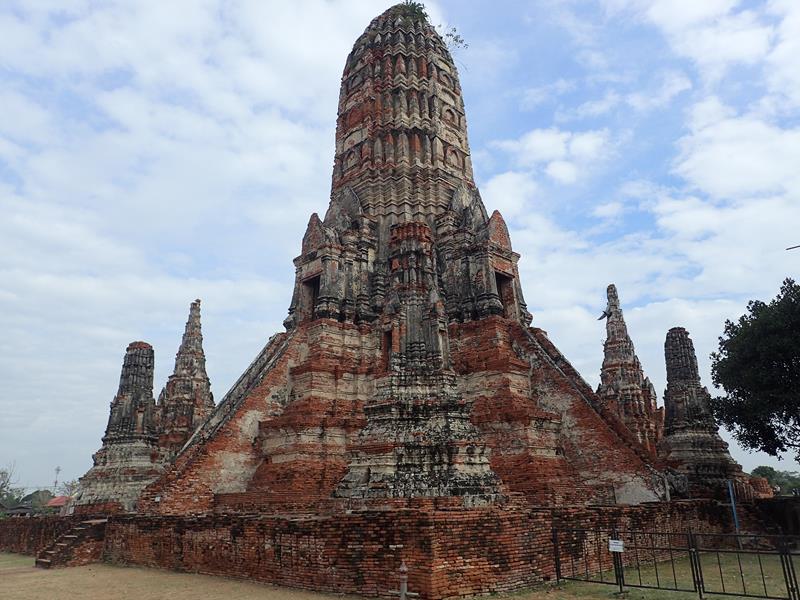 Ayutthaya is the ancient capital city of Thailand, before the capital was moved to Bangkok. Ayutthaya is around 1 hours drive north of Bangkok (around 80 kms) and has some excellent historical sites which is well worth making a day trip to. There are several hundred historic sites in Ayutthaya so you could really spend more than 1 day here.

Ayutthaya was Thailand’s capital city from 1350 AD until the city was ransacked by the Burmese in 1767. During the Ayuttthaya period hundreds of important Buddhist temples were constructed around Ayutthaya, most of which were completely destroyed.

If you only have time to do a day trip here is information on the best historical sites to see in Ayutthaya.

Wat Chaiwatthanaram is Ayutthaya’s most popular temple to visit. Located on the banks of the Chao Phraya River which flows south down through Bangkok. Wat Chaiwatthanaram has a number of large stupas which remain in good condition. All around the grounds are statues of the Buddha which are vary in the condition they are in. Many of these statues are missing arms or missing their heads but this temple is one of the most amazing historical sites in Ayutthuya.

Entrance into Wat Chaiwatthanaram costs 50 Baht. The grounds are open 7 days a week from 6am to 9pm.

Phra Buddha Sai Yat (The Reclining Buddha) is a large statue of Buddha out in the open right next to Wat Lokaya Sutha in the western part of Ayutthaya. Although it is not known when the reclining Buddha was built, it is presumed that it dates back to the early part of the Ayutthaya period.

The Reclining Buddha in Ayutthaya is 42 meters long and 8 meters high. There is no entrance free to go and see the reclining Buddha. Although the statue is out in the open now, it is believed that at the time of it’s construction it was inside a large Vihara (Buddhist monastery building).

Located within the grounds of Wat Maha That is one of the most interesting attractions in Ayutthaya, the Buddha Head in Tree Roots. The statue head was once on top of large statue but had fallen to the ground. Over the hundreds of years a tree grew up around the statue head encasing the Buddha head as seen in the photo.

It is believed the statue dates back to the middle of the Ayutthaya period, in the 1600’s.

There is a 50 Baht entrance fee into Wat Maha That and there is more to see here than just the Buddha head. There are loads of ancient Buddhist stupas and the foundations of the old Vihara buildings which made up the huge complex of Wat Maha That.

There are hundreds more interested things to see around the Ayutthaya area. One of the best ways to get around is by hiring a bicycle. Ayutthaya is flat so easy to ride around to all the different historical sites. Also in the centre of Ayutthaya you can go for an elephant ride around the city central area.