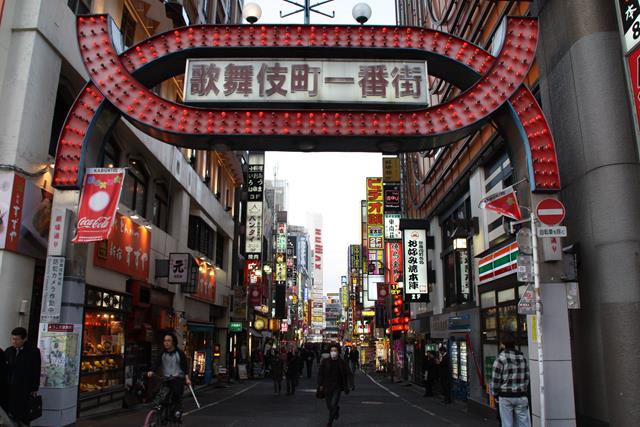 Kabukicho was named after a Kabuki Theatre which was built in this area though the theatre burned down and no longer exists. Kabukicho is located east of Shinjuku Train Station, just a few minutes walk away. The streets of Kabukicho are a tourist attraction on themselves. Narrow streets with tall buildings lined with huge neon lights. These streets were actually the inspiration for the sets of the old movie Bladerunner with Harrison Ford.

Although Kabukicho is the red light district, it is totally safe to walk around. Tokyo is after all the safest city in the world. The dodgy hostess bars, strip clubs and brothels of Kabukicho are generally off limits to foreigners. This red light district is still run by the Japanese mafia, the Yakuza, and they discourage foreigners from entering their sleazy clubs as they do not want any trouble as foreigners will not understand the rules. If a foreigner feels they have been ripped off the first thing they do is go to the police. Police interest in these clubs in the last thing the Yakuza want!

On the streets of Kabukicho, there are lots of Nigerian men trying to get foreigners into ‘their’ clubs. These are probably hired help for the Yakuza to do their dirty work. Now if you want to be ripped off then by all means check out their clubs. There are many stories of foreigners being ripped off in these sorts of clubs and bars in Tokyo. You go in for 1 drink, have a pretty girl sit down next to them and ask for a drink, and then be presented with a bill for hundreds if not thousands of dollars. Try to getting out of paying that bill!

With the cleaning up of Kabukicho, the Yakuza have not moved out but more people are coming to Kabukicho for the restaurants and the new Toho Cinema and IMAX Cinema complex which has standard cinema screens and the huge IMAX cinema. The Toho Cinema complex in Kabukicho shows Japanese movies as well as all the latest release Hollywood movies. The best feature of the Toho Cinema Complex is the huge Godzilla head popping out the top of the building.

There are a few good quality hotels right in the heart of Kabukicho Tokyo.

Check out the best hotels in Kabukicho.

Check out the Video of Kabukicho Toko’s Red Light District