Scott Posted on May 28, 2018 Posted in Feature article, Fiji, Taveuni Island No Comments 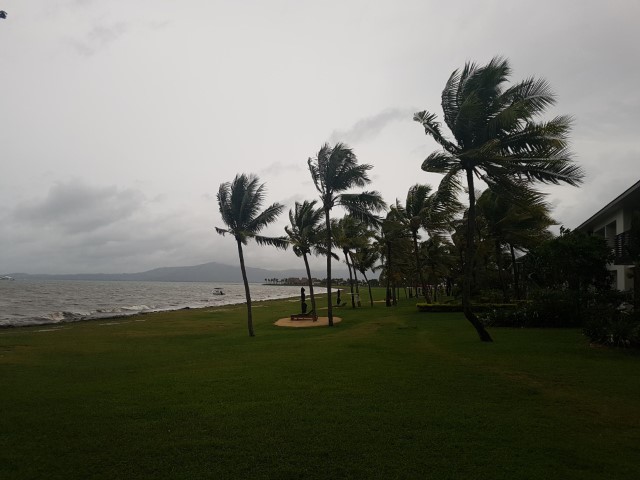 The wet season or rainy season in Fiji is during the months of September through to March each year. At the end of the wet season there are high chances of tropical cyclones, some of which are the most sever in the world.

They may cop some sever storms, but the people of Fiji live on and rebuild after each storm.

Cyclones can see winds of anywhere from 100km/h up to gusts of 280km/s. Cyclone are numbered based on how sever they are. Category One cyclones have wind gusts up to 125km/h. The Category Four cyclones are the most sever with wind gusts up to 280km/h.

As weather patterns change, the cyclones come to Fiji sometimes later than March. I went to Fiji over Easter 2018 from Friday 30th March 2019 through to Sunday 8th April 2018. During my time in Fiji, I experienced 2 cyclones, 7 days of overcast and daily Thunderstorms and 1 day of sunshine in the middle of the 8 days.

The 1st cyclone I experienced was Cyclone Jose which came past Nadi Fiji around 3am on the Sunday 1st April 2018. The second was Cyclone Keni. Cyclone Keni actually hit 2 days after I left Fiji but the initial tropical disturbance delayed all flights out of Nadi the day I was leaving. Flights were delayed for 3 hours or more.

I wasn’t aware Cyclone Jose was coming. I had just arrived in Nadi the day before. It was very windy in the afternoon and I joked that a Cyclone was coming. The wind got stronger as I was out for dinner and around midnight the wind was howling. I slept and woke up next morning to hear about the cyclone coming past at 3am and saw some of the carnage. In the resort I was staying in, the Hilton Fiji Beach Resort, there were many trees that had fallen down.

Trying to get to the airport the next day to fly to Taveuni Island was a bit difficult due to flooding. I got picked up at the Hilton by a taxi and as we left the hotel he said that it may be hard to pass the next village as there was flooding. After 10 minutes in the sedan taxi, we had to transfer to a 4WD to get through the flood waters. In a small sedan, the flood water would have been over the tires so very dangerous to pass some of the flood waters. Even in the 4WD is was a bit dodgy to travel through some of the fast moving waters.

Check out the video from the Nadi Fiji flooding on Sunday 1st April 2018.

Even though you can get some cyclones and thunder storms through the end of the rainy season in Fiji, you can also get some spectacular sunny days between all the weather chaos.

Unfortunately if you are a scuba diver or snorkeler, even when you get a sunny day during the end of the wet season, with all the rain and  the wind, the sea conditions are not going to be pleasant for watching the fishies.

The ideal time to go to Fiji for a relaxing, sunny beach vacation is during the dry season from late April to August. I was very unlucky to get 8 rainy and stormy days at the beginning of April but best to travel in the dry season.