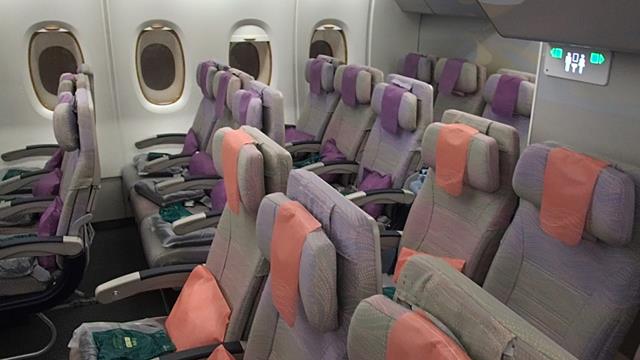 Check out out full video flight review for this Emirates flight

Booking the flight: I booked this flight with Emirates through the Qantas website. I had planned to fly with Qantas and saw I could also fly with Emirates. I had planned to buy an Economy ticket and use Qantas Frequent Flyer points to upgrade to First Class as I really wanted to try the Emirates A380 Closed Suites First Class cabin. Once I booked and paid for the Economy ticket I was most disappointed to find I couldn’t use QFF points to upgrade on the Emirates Flight. Very disappointing.

There is plenty of duty free shopping and loads of food outlets at the airport.

The seat: The A380 is the largest passenger plane flying the skies. On the Emirates A380 there are 427 Economy Seats, 76 Business class seats and 14 Closed Suite First class cabins.

For this flight I was in an Economy seat. This is the first time I have flown in Economy on an International fight for many years. I was impressed with the leg space in the economy seats. I had a window seat and scored a massive bonus on this flight as the 2 seats next to me were empty to I got to lay down during the night flight and get a few hours sleep. No need for my to recline my seat back as I had a whole 3 seats to lay down in.

The service: I have flown Emirates 3 times in the last 2 years. Twice now in Economy and once in Business Class. The service on Emirates is the best I have experienced on any airline. The staff are genuinely friendly and happy to help. Before the flight they made an announcement saying that the crew on the A380 came from 25 different countries and spoke 19 different languages.

Even in Economy they give you a basic amenities kit which contains some earplugs, a pair of socks, eye mask and a toothbrush and toothpaste.

Emirates also provide a very nice inflight magazine called Open Skies. As well as all the full pages advertisements there are some interesting travel articles to read.

Wi-Fi Available: All the Emirates A380 planes have inflight Wi-Fi internet access. All passengers get 10Mb of download for free. After that you have to pay US$1 per 600Mb of data. This is a pretty good deal. I used the WiFi very briefly to check my emails during the flight but that is all. The speed seemed a bit slow but was OK for what I wanted to use it for.

The entertainment: There is loads of entertainment on the Emirates ICE Entertainment System (Information, Communication and Entertainment). The TV screen is a nice sized 13.1 inches touch screen. There are thousands of movies, tv shows and documentaries to watch. They also offer live major sporting events and live News shows like CNN and BBC.

The food: Along with the service I think Emirates serve up the best food of any airline. In the last 2 years I have flown with many airlines like Qantas, Jetstar, Japan Airlines, ANA, Cathay Pacific, AirAsia, Garuda Airlines. Out of all these airlines I think the food on Emirates is the best.

On this Bangkok to Sydney flight I enjoyed a nice smoked salmon with pasta salad as entree and a delicious Thai chicken curry with rice for main meal and a tasty date cheesecake served with raspberry coulis.

After a few hours sleep and around 1.5 hours before we landed they brought around breakfast which was a fruit salad, orange juice, a muffin and a bread roll with butter and marmalade.

Anything else: Now that I have flown Economy and Business Class, my next goal is to try the Emirates Closed Suites First Class Cabin. I need to get saving to be able to afford that luxury!!