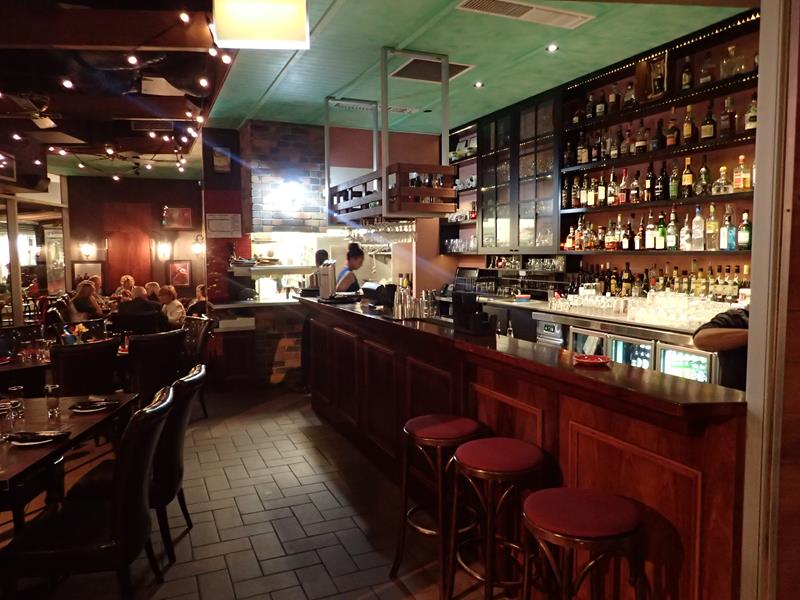 I went in for dinner at the The Cuban Bar and Lounge in Broadbeach on Saturday night with 2 ‘friends’ and all walked out impressed with the food and service. I had done a search for restaurants in Broadbeach and scrolled through the huge selection and the idea of Cuban food appealed to us all. Their website lists their address as the Cnr of Surf Pde and Elizabeth Ave though the restaurant is found on Oracle Ave, directly opposite the Bavarian Bier Cafe within the Oracle Building Complex (which is on the Cnr of Surf Pde and Elizabeth Avenue in the heart of Broadbeach).

This restaurant is a gem! I would list it in the top 10 restaurants on the Gold Coast. With a choice of Tapas dishes which are all great for sharing or a good choice of main meals if you want the food all to yourself. We went for a selection of the Tapas menu. We ordered four dishes to start with. First up came the slow cooked pork belly (Dulce Cerdo Picante) which was the absolute star of the meal.

We each got a serve of the pork belly which was cooked to perfection. It came out resting on a fresh slice of apple which added a bit of tartness to the sweet, delicious pork.

The other dish that came out with the pork belly was their legendary lamb meatballs filled with feta cheese (Albondigas). These came on a stick with a slice of chorizo sausage and a cherry tomato. The lamb was also cooked perfectly and the feta cheese was soft and runny inside.

The next 2 dishes arrived quickly after – the Pulpo (tender octopus with patatas bravas and a capsicum and basil pesto) and the Pollo de la Navana (chicken strips marinate in garlic citrus juices with sweetcorn and black bean relish on rocket). These were both fine dishes and polished off as quickly as the first 2 dishes.

We wanted more food and there was considerable pressure from the ‘friends’ to order another plate of the slow cooked pork belly (as it was that good to go a second round). As I was paying this was vetoed and we ordered 2 more dishes – the Crocante Calamari (salt and pepper calamari) and the Chorizo a la Miel (Spanish Chorizo sausage tossed in rosemary, thyme and garlic.

The calamari was tender and cooked well though not much hint of the salt and pepper. It was a good dish but definitely not a stand out. The chorizo sausage was nice also but maybe a little over cooked. The last 2 dishes were not outstanding but the first 4 dishes were, allowing as all to give this restaurant the thumbs up!

They have a good beer menu with a couple of different Cuban beers, some Spanish beers and local beers. Also an extensive wine list but we stuck with the beers. They also have a good range of Cuban rums and tequilas. We started with the Cuban beer Palma Cristal which is a very light lager. Very much light in flavour we then tried to order the Bucanero Beer but were told that they were on the slow boat from Cuba and were not in stock. We ended up going for the Spanish beer – Alhambra Reserva 1925 which was also a lager though had much more flavour than the weaker Cuban beer. The imported beers were a bit pricey at between $9 – $9.50.

We got there at 6pm and by 6.30pm the restaurant was full. Even with a full house the staff were attentive and friendly.

The Cuban restaurant has an indoor dining area and also an outdoor dining area which was closed in with plastic sheeting which can be opened fully up during the warmer summer months. Perfect for alfresco dining and watching the crowds meandering through the busy Broadbeach dining district.

The 6 dishes and a few imported beers each came to$169, so a total of around $56 per person which I think is quite reasonable considering the excellent food!

Put this restaurant on your list of places to eat when visiting the Gold Coast!