Scott Posted on December 2, 2019 Posted in Flight Reviews No Comments 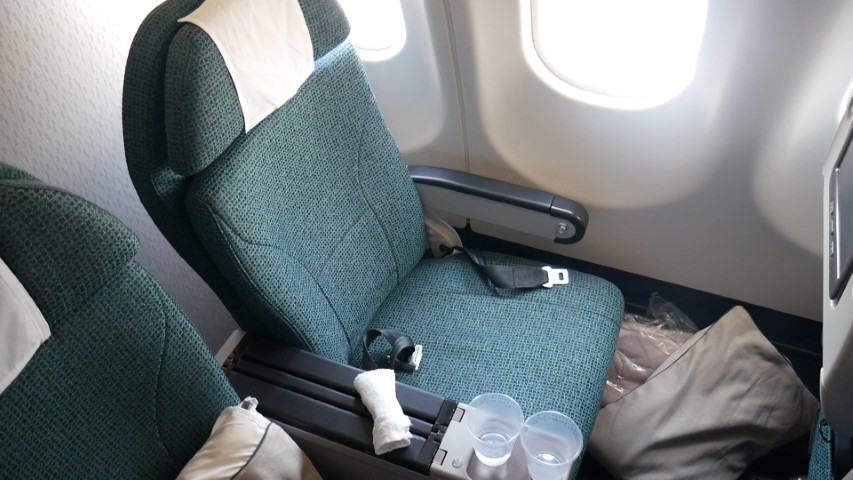 With a Premium Economy ticket you get priority boarding on to the plane.

The seat only reclines back a few inches. As this seat was in the back row with a wall behind it, it could have reclined further but I guess all the seats are designed the same.

There is only a small storage area attached to the seat in front where you can store your passport and mobile phone.

The crew handed out a drink before take-off with a choice of water or orange juice. No champagne was on offer.

They also handed out a Premium Economy amenities kit which contained an eye mask, pair of socks, ear plugs and a tooth brush and tooth paste.

There is a touch-screen entertainment unit which I would say is about 11 inches in size. This unit was powered by the Panasonic Avionics which is one of the best entertainment units in the sky. This was loaded up with a huge selection of latest release movies in both English and Chinese.

The flight map was a modern animated map where you could see an animation of the plane and the cities you are flying over.

I did not notice if there was a universal power adaptor in the arm rest but I was not looking to do any work so didn’t need it.

One word for the food served on this flight = Awesome!

Cathay Pacific really do a good job serving up tasty food! On this flight between Sydney and Hong Kong, 2 meals were served. A breakfast was served after take-off and a lunch was served about half way through the flight.

For breakfast there were 3 meals to choose from. The first was a Tomato and mushroom frittata, chicken sausage, potato rosti and spinach.

The other choice was a Stir fried egg noodles with barbecued pork in hoisin sauce and choy sum. As we were flying to Hong Kong I chose this Asian breakfast and it was delicious. Nice thick noodles and the barbecued pork was delicious. This was served with some fresh seasonal fruit, fruit yogurt and a croissant with butter and jam. Delicious breakfast to start the flight.

For the lunch, there were 3 meals available:

I went for the braised beef short ribs and this was another tasty dish. The beef was so tender and packed full of flavour and the mashed potato nice and fluffy and the vegetables were firm, not soggy.

This lunch was served with an entree of smoked chicken with pumpkin couscous salad with bread and butter.

After the meal was finished the crew served tea and coffee and a delicious Movenpick ice-cream for dessert. Now as with most airlines, the ice cream arrives rock hard. You need to wait for about 10 minutes for it to thaw before you can get your spoon into it.

2 excellent meals on board Cathay Pacific.

Now I did notice that this was the exact same meals that were served in Economy. As i was in the last row of Premium Economy, I could see them handing the same meals there. I had presumed they served different meals in premium economy but all the same as economy. Luckily the Cathay Pacific food is really good!