Scott Posted on October 8, 2017 Posted in Flight Reviews No Comments 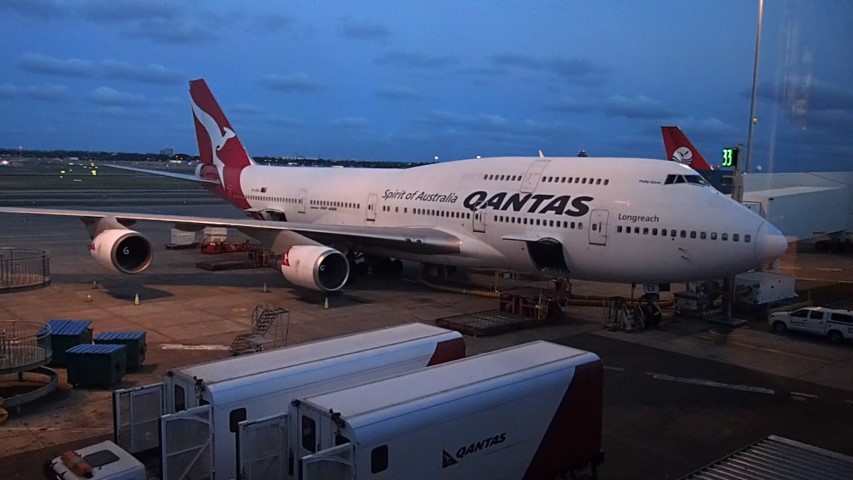 For this flight review I do a lot of complaining about seat 46A. This is an emergency exit row seat which is supposed to have extra legroom and a window but does not have either.

It has been a long time since I have flown in Economy Class on this QF25 flught. I have flown this route many times over the last few years and usually fly in Business Class or Premium Economy.

I choose Economy this time so I could extend my trip to 3 weeks and rather than pay extra for the Business Class seat, I could pay for the extra accommodation.

The best way to get to Sydney airport is on the train. The train from the Sydney CBD city are will cost $13.80 and will take under 15 minutes.

A taxi will take more than 30 minutes and cost around $50.

Flight check-in is usually 3 hours before the flight. I got to the airport early and was able to check in for this flight 3.5 hours before the flight. I am not sure when check in for flight QF25 opens but I guess there are always Qantas staff at the check-in counters as all Qantas flights check-in at the same counters. There was no queue when I check-in. About 30 minutes later I walked past the check-in counters and there was quite a long queue. Best to get the airport early and save the waiting in line.

When I check-in the guy serving me confirmed I wanted a window seat. I said I did and I asked him to confirm that it definitely had a window at this seat as I saw some other of the emergency exit seats were marked as not having a window. He checked on the system and confirmed it did have a window.

Before you pass through the immigration security, there are plenty of shops and food outlets available.

Once you pass through the security there is even more duty free shopping and loads of food outlets.

When I arrived at my seat 46A the first thing I noticed was the lack of legroom. Seat 46A is an emergency exit seat which is supposed to have extra legroom. But in seat 46A there is the large door bulkhead right in front so makes it very cramped foot space. You can stretch your legs out to the side of the door but it is very uncomfortable. Even with your legs stretched out, you legs are pushed up against the door and once in the air at cruising altitude the door becomes very cold so with your legs rubbing up against the door it is a very uncomfortable ride.

The next thing I noticed is that seat 46A does not have a window. This was very annoying as when I booked my ticket and choose the seat I check that it was a window seat and also at check-in the Qantas staff confirmed this seat does have a window. I have written an email to Qantas to change their seat map and mark this seat as not having a window. I’ll update this post once I get a reply (if I get a reply – last time I submitted a complaint on the Qantas website I got no response!).

These is a window in the exit door but you have to stretch forward to be able to see out that window.

The worse thing about this seat is Qantas charge an extra $90 to sit in the emergency exit row as it has extra leg room. I didn’t have to pay the $90 as I am a Platinum Qantas Frequent Flyer, I get priority seating with the extra legroom at no extra cost. I would have been really annoyed if I had paid an extra $90 for this crappy seat.

It is such a shame that this seat does not really have the extra legroom.

At the end of the flight I jumped into the row behind to see what the legroom is like in the standard economy seat. See the pic below for the standard legroom for Qantas Economy. Not the best legroom I have seen!

After take-off I pulled the entertainment screen up.  The screen is a tiny 10” screen. Once I started watching a movie, you forget how small the screen is but it really is a small screen. I am not sure if this screen was smaller than the other screens built into the seat but I think it was.

The headphones in Economy class are very cheap and nasty. They are non-noise canceling and the sound quality is very poor. If you turn the volume up loud you get a very nasty screeching noise coming from the headphones.

The food menu for this Qantas economy flight had 3 choices for the dinner service:

The main meals are served with a garlic ciabatta (bread roll)

For my main I ordered the Braised beef with shiitake mushrooms. The meal did not look that good but tasted much better than it looked. It was like a sloppy beef stew and the cup of rice was resting on top of the stew. There wasn’t a lot of beef in my serving and the beef was very fatty. Oh the joys of Economy food!

For the dessert there was a very tasty passion fruit pavlova. The pavlova was not very crispy, very soft but it was yummy!

On the flight from Sydney to Tokyo or the return leg back from Tokyo, they have the Japanese beer Kirin Ichiban which is one of my favourite Japanese beers. This was the highlight of this Economy class meal!

For breakfast you got a Roast Pumpkin and Feta Cheese tart and a Traditional Greek yoghurt with mango compote and granola. Now I am not fan of pumpkin or feta cheese. i did try the tart and it tasted ok but I didn’t finish this tart.

The Greek Yoghurt was delicious. The mango compote made it sweet and the granola was crunchy and made the yoghurt a delicious breakfast meal.

I still rate the service in Qantas Economy class as one of the best airline services in the air. The flight crew were lovely. When I saw my disappointing seat, especially that it didn’t have a winows, a cabin crew was standing next to me. I mentioned that this seat is supposed to have a window seat. She said she would check if there were any window seats after.

After take-off she came back to me and said there was a window seat available in an emergency exit row on the other side of the plane. I actually chose to stay in this seat as I was on the left hand side of the plane. When I flew into Tokyo Haneda in July, I got an amazing view of Mount Fuji. I decided to stay in this seat for the chance to see Mount Fuji again. Unfortunately when we came in to land at 4.30am it was still dark so couldn’t see anything. In July the sun comes up much early than it does in October.