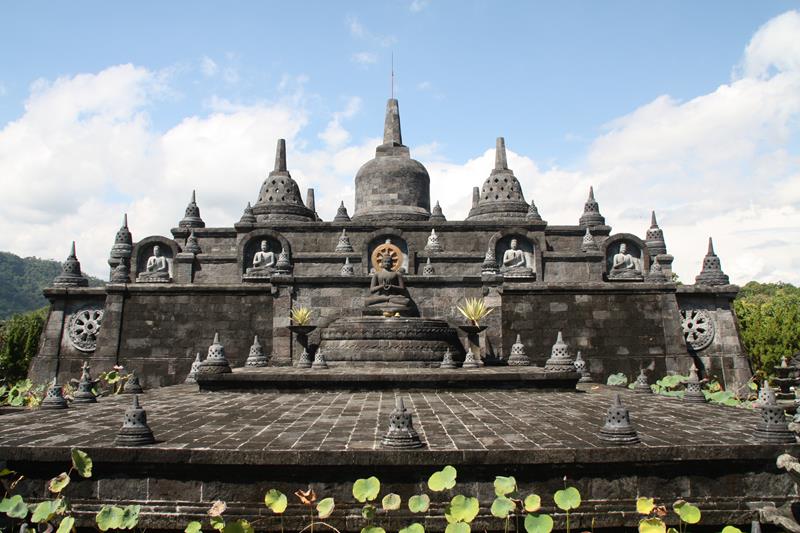 Surf, sea, sand and sunshine is what the majority of visitors to Bali come for. Add to this the cheap Bintang beer and the cheap t-shirts, Bintang singlets and shorts sold along Poppies Lane and this sums up the vast majority of the tourists who come to Bali (especially the swarm of Australian visitors!).

If you looking for something more out of your holiday to Bali, and want to get out and about and see and learn a bit about the Balinese culture then get out of Kuta and see some of the amazing, and very important religious temples and shrines around Bali.

Uluwatu Temple is a Balinese Hindu temple perched on top of a cliff on the Uluwatu headland, just south of Nusa Dua. You can visit the temple grounds though only Hindu worshipers are able to gain access and approach the temples and shrines. It is still very much worth visiting Uluwatu temple for the amazing views over the cliffs.

There are many monkeys found around the grounds of the Uluwatu temple. These monkeys are mostly harmless but just be careful with your cameras, sunglasses and handbags. They monkeys are quite curious and if they see something they can grab they will and run off with your things.

Tanah Lot Temple is another impressive Hindu Temple build on a large rock which is surrounded by water during high tide. Tanah Lot is located on the southern coast of Bali, around 1 hours drive from Kuta Beach. The best time to visit Tanah Lot Temple as in later afternoon to watch the sunset over the ocean behind the temple. It makes for some great photos. Also at low tide so you can get up close and go inside.

Also check out the Tanah Lot website which lists some of the up coming religious festivals. The best time to visit any of the temples in Bali, is when there is a religious festival. Not only do you see all worshipers wearing their traditional Balinese clothing, there are also lots of food stalls to get some nice Balinese snacks and meals.

Pura Beaskih is known as the Mother Temple as is the most important temple to the Balinese. Balinese Hindu must visit this temple at least once every year.

The Mother Temple is build on the side of Gunung Agung (Agung Volcano) which is the largest volcano in Bali and itself a very worshiped mountain.

If you visit this temple, have a look around the grounds for a small fern like plant called a Mimosa pudica which is a plant that moves when it is touched. There are guides available at the temple who can show you around for a small donation. Ask them to find this plant for you.

The best time to visit the Mother Temple is in the mornings so you can get a good view of Mount Agung as your drive up to it. In the afternoon the mountain is often covered with cloud so you will be unable to see the top of the volcano.

The Ulun Temple (Pura Ulun) was built on the shore of the Bratan Lake (Danau Bratan) close to the centre of Bali. It takes around 2 hours to drive to Pura Ulun Danau Bratan from Kuta Beach. If you are making the journey from the south coast of Bali up to Lovina Beach on the north cost of Bali, then this is a good mid way stopping point to check out the temple and have a rest from the car trip.

Right on the north coast of Bali, just a few kilometers away from Lovina Beach, is one of the nicest Buddhist temples I have visited. You can visit the The Brahmavihara Arama Buddhist Temple and walk around the grounds which have some beautiful gardens with many statues of the the Buddha and lovely pogadas, stuppas and gardens.

The Brahmavihara Arama Buddhist Temple run meditation retreats all throughout the year. They have basic accommodation where you can stay and they teach you the Buddhist teachings (Dharma) as well as various meditation techniques.

Goa Gajah or the Elephant Cave is a Hindu Temple located just outside of Ubud in the hills of Bali. The shrine was built in a small cave and used by Hindus for a place for meditation which dates back to the 9th Century.

Around the cave are loads of shrines and temples and to this day is still a place for many local Hindu worshippers to come and pray. The temple is still active in the teaching of the Balinese Hindu religion.

On the north-east coast of Bali, on the way to Candidasa is a interested temple called Pura Goa Lawah or in English Bat Cave Temple. It is a Hindu Shrine which has been built at the mouth of a natural cave which is home to thousands of bats.

You will find the Bat Cave Temple around 30 minutes drive from Sanur, or around 1 hour drive from Kuta.

Read more about The Bat Cave Temple in Bali

Important shrine but not really worth visiting

Years ago I was staying in Sanur in Bali and I had read in the Lonely Planet guide that one of the most sacred shrines was located at the southern end of Sanur called Pura Blanjong. This shrine has one of the oldest stones with inscriptions in Sanskrit telling of a Javanese King who came to live in Sanur and brought Mahayana Buddism to the area (called Prasasti Blanjong). Off I went to see this sacred shrine. The book gave a vague description of it’s location. I got in a taxi from my hotel and asked him to take me to this shrine. He had to stop along the way to ask to locals for directions and he was not exactly sure where it was.

He finally stopped and told me it was down the small laneway he had pulled up next to. I got out and there was a tiny sign point to the Pura Blanjong. I walked a few minutes down this deserted laneway that traveled between houses. At the end of the laneway it open up to a small clearing which had this small shrine with the stone in the middle. There was no massive temple as I was expecting just a small shrine with this stone inside. There were no worshipers at the shrine. Just me! It may be the oldest stone inscription but definitely not the most impressive.