Best Temples to visit in Bangkok 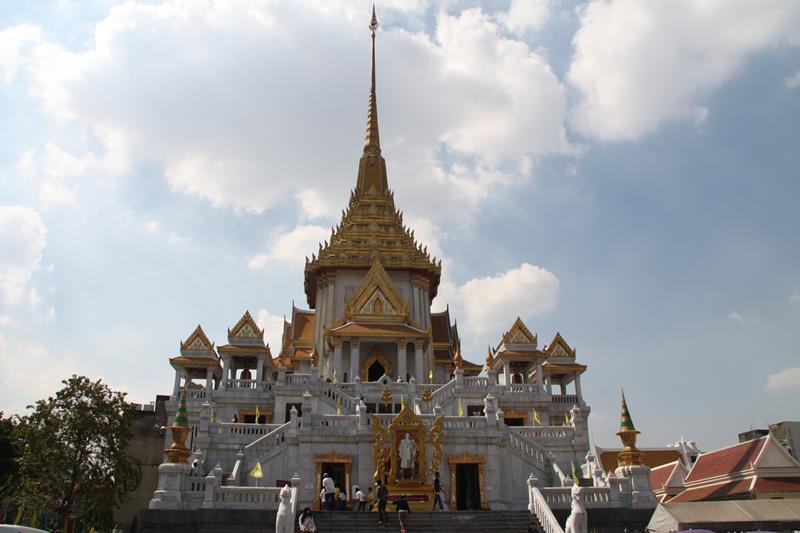 Temple of the Golden Buddha Bangkok

There are temples and shrines found all over the city of Bangkok Thailand. It would take weeks to get around to visit them all so here is your guide to the best temples to visit in Bangkok.

Although the Grand Palace isn’t actually a temple, it does contain a number of important temples and shrines. The Imperial Palace is home to the Thai King and royal family. Built in 1782 it has many beautiful buildings throughout the grounds which is open to the public everyday from 8.30pm – 3.30pm. Best time to visit the Grand Palace is first thing in the morning. Get there by 8.30am to miss the Bangkok rush hour traffic and to miss all the crowds of people who come later in the day. The Grand Palace is the most visited tourist attraction in Bangkok.

The most important temple within the grounds of the Grand Palace is Wat Phra Kaew or the Temple of the Emerald Buddha. The building is impressive and houses a statue of the Buddha made from Emerald. You are unable to enter to approach the Emerald Buddha and the statue is quite small and you can only see it from a distance.

Warning – The Grand Palace grounds gets very crowded with people from all over the world. Some of these tourists don’t have any manners and will just push you out of the way (I’m talking to you Chinese tourists!)

Wat Pho – The Temple of the Reclining Buddha

Wat Pho – The Temple of the Reclining Buddha is located right next to the Grand Palace. It has a seperate entrance and costs 100 Baht to go inside. The grounds of Wat Pho are quite large and it is not just the recling buddha that is worth visiting. There are many statues of Buddha throughout Wat Pho so take your time and wander around the grounds to discover.

Warnings – There are signs around Wat Pho warning you about pick-pockets, not local Thai pick-pockets but Non Thai Pick-pockets. Apparently there have been teams of European pickpockets working around the temples of Bangkok.

Wat Arun – Temple of Dawn is a really impressive temple located on the western side of the Chao Praya River, diagnoally across from Wat Pho. The impressive main spire of Wat Arun is 70 meters tall and can be viewed from many parts of the river. Entrance fee into Wat Arun is only 50 Baht. Open daily from 8am – 5.30pm. At night time Wat Arun is lit up by lights so an impressive site from the opposite side of the river. You can catch a ferry across to Wat Arun from the ferry terminal right in front of Sapphan Taksin BTS Skytrain station.

The Biggest Golden Buddha in Bangkok

The biggest Buddha in Bangkok is found at Wat Paknam Phasi Charoen located in the Thon Buri area of Bangkok, west of the Chao Phraya River, on the opposite side from the main tourist area. A taxi from central Bangkok will take around 25 minutes or you can get BTS close to the temple, with a 20 minute walk from the station or get a motorbike taxi from the station to the temple.

This 69 meter tall Golden Buddha statue was completed in 2021, through the temple itself dates back to 1610. Not many tourists visit this temple but I rate it as a must visit when in Bangkok.

Read more about The Biggest Buddha in Bangkok

Wat Traimit – The Temple of the Golden Buddha

The Golden Mount (Wat Saket) is one of my favourite temples in Bangkok. Not only are the grounds lovely but when you climb to the top of the Golden Mount you can get great views over Bangkok. And it is free entry into the temple! The gardens around the Golden Mount are lovely with loads of statues of Buddha.

The Golden Mount is a Buddhist temple that dates back to around 1350AD. There are 300 steps to get to the top of the temple. At the top there are various statues of Buddha either sitting or laying down.

Erawan Shrine is the most important Hindu shrine in Bangkok. This small shrine is located right next to the Grand Hyatt Erawan Hotel. The statue in the centre of the shrine depicts the Hindu god Brahma the creator. There are always people at the shrine during the day or evening offering flowers, fruit, drinks and prayers. Along the road outside of the shrine there are always stalls selling the flower offerings.

Wat Poramaiyikawat is located on Koh Kret which is a small island in the middle of the Chao Phraya River, around 45 minutes drive north of Bangkok. This temple is actually outside of Bangkok, in the next province of Nonthaburi, though close enough to do an easy half day trip to. There are more than 20 temples on Koh Kret but Wat Poramaiyikawat is the more interesting. The best statue is the reclining Buddha which is 9.5 meters. Just at the back of this main temple building is another interesting Buddha statue called Phra Nonthamunin. Right out the front of Wat Poramaiyikawat, on the banks of the Chao Phraya River is the leaning stupa where you will see many local Thais bowing down in front of to make worship.