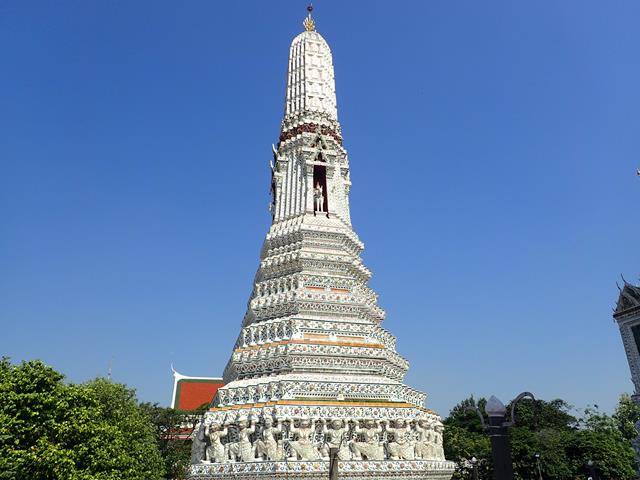 Wat Arun is one of the most impressive Buddhist temples in Bangkok. Located on the western bank of Chao Phraya River. At the time Wat Arun was built it was in the centre of Bangkok, before the city center moved to it’s current location on the other side of the river.

Wat Arun is one of the most visited temples in Bangkok, along with Wat Pho and the Grand Palace which are located diagonally across the river. Wat Arun dates back to 1768, build by King Taksin, just after Burma invaded the ancient capital of Thailand, Ayatthuya.

The main spire of Wat Arun is 70 meters tall and around this are 4 spires at each corner. You can climb the steps up to the top of the base of the temple. Right around the grounds of Wat Arun are loads of nice statues of the Buddha. Wat Arun is still a teaching temple so there are Buddhist monks who live in the surrounding buildings next to the temple. You will often seen the monks walking between the buildings in their robes.

At night time Wat Arun is all light up with flood lights so an impressive sight from either side of the river.

In January 2017, Wat Arun was going through some major renovations so the main tower spire is surrounded by scaffolding. The renovations will be going on in the early part of 2017.

Entrance fee into Wat Arun is 50 Baht per person. There is a sign at the front advising that people should be dressed respectfully and to have your legs and shoulders covered. They have sarongs available for rent to cover your legs but not everyone observes this. I went there with my a Thai driver I have known for many years. I asked him if I needed to cover my legs (I had my own sarong in the car just incase). He said there was no need to do this! I walked around the outside of the Temple in a pair of shorts and non of the Thai people working at the temple asked me to cover up. I would suggest as a sign of respect you should cover your legs. The local Thai people don’t say anything if you are wearing shorts but expect dirty looks from the other tourists who are doing to right thing.

The rental of a sarong to cover your legs only costs 20 Baht. You do need to leave a 100 Baht deposit which you get back when you return the sarong at the end of your visit.

There is a ferry pier right out the front of Wat Arun. To arrive by boat you can catch a BTS Skytrain to Sapphan Taksin station. Exit the station and their is a ferry pier just 100 meters in front of the station, You will see the river as you are walking down the steps. From this pier there are river boats that cross over to the ferry pier at Wat Arun.

See the location of Wat Arun Temple of Dawn on Google Maps.

Check out more of the Best Temples in Bangkok