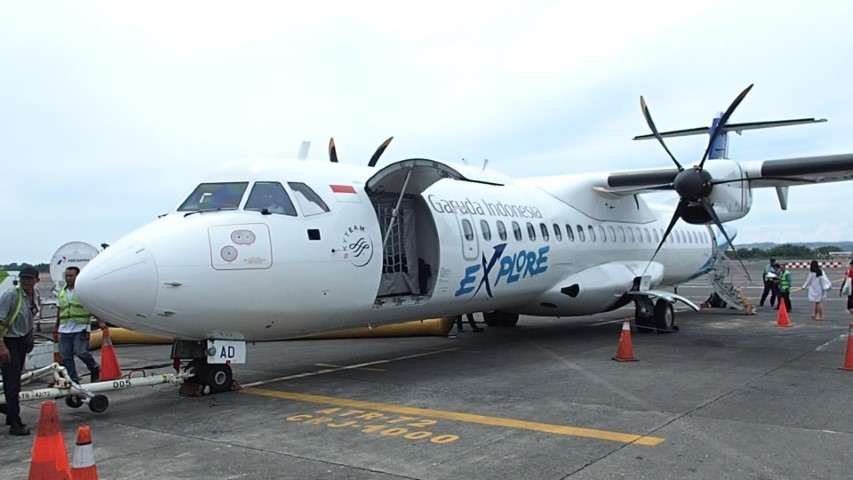 In Bali I was staying in Nusa Dua and it takes around 25 – 30 minutes to get to Bali Denpasar airport. There is the Toll Road expressway from Nusa Dua to the airport which probably saves around 5 or 10 minutes going via the non-toll road. The cost of the expressway is 10,000Rp.

The Bali Domestic airport is the old International terminal. It actually has a huge selection of coffeeshops, restaurants and some shopping. I remembered I needed to buy a USB charger and there is an electronics store that I was able to buy this at. I ended up getting 2 for the price of 1.

There are 3 airlines which fly from Bali to Labuan Bajo. Garuda Indonesia, Wings Air and NamAir. Garuda is the most relaible out of these airlines.

For coffee, there are a number of places to go including a Starbucks and a Kopi-O coffeeshop.

For food, there are more than 6 restaurants to choose from including a Pizza Hut. If you really want to try some excellent traditional Balinese food then check out Made’s Warung.

Bali Airport (Ngurah Rai) Denpasar has free WiFi internet access which is reliable. I have never had problems connecting to the WiFi and the speed is quite good.

The ATR72-600 is a smallish, twin propeller plane with 70 seats on board. Surprisingly the leg room of the seats is quite good. This is only a short flight, less than 1.5 hours, but you still have some decent leg room. I am 187cm tall and was very comfortable on this flight.

I recommend for this flight from Bali to Labuan Bajo to sit on the left hand side of the plane. On this side of the plane, if weather conditions are clear, then you will get some excellent views over Bali after take-off, including great views over to Mount Agung volcano.

There are no entertainment screens on the AT72-600 planes. They do have a Garuda Indonesia ‘Colours’ inflight magazine which has some great travel articles about Indonesia both in English and Bahasa Indonesia.

The flight magazine is good but the best entertainment is the scenery out the window.

As well as the views of Mount Agung and Mount Rinjani, you get some awesome views straight down at the various small islands along the way. Depending on the weather conditions and the route they take, you may fly over the Southern Gili Islands just to the east of Lombok.

I was not expecting any food on this flight as it is such a small plane but Garuda surprised me by serving a snack. On flights less than 1.5 hours Garuda hand out cold snacks.

On this flight the snack box contains a bread roll and a bag of mixed nuts. They also provided a soft drink with the snack.

Garuda Indonesia always impress me with their service. I have flown with them many times internally in Indonesia and also on international flights between Sydney and Jakarta.

The service on Garuda is always top notch. The quality of the food is always impressive. Even with this small snack they handed out, the presentation was good, the food was fresh and tasty.

Final word on this flight

It is only a short flight but one of the most enjoyable flights around Indonesia. The scenery is spectacular. As I mentioned above I highly recommend you get a seat on the left hand side of the plane to get the best views of the mountains and the islands between Bali and Lauban Bajo in Western Indonesia.