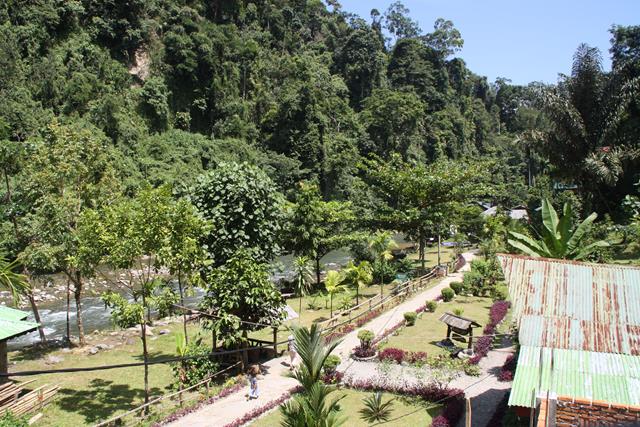 When it comes to jungle trekking you are spoiled for choice! Some of the best jungle trekking in Indonesia is found on the island of Sumatra and Borneo (the southern part of Borneo island is the Indonesian territory of Kalimantan). On both Sumatra and Borneo, the jungles are home to some of the most unique and rare animals like Orangutan, gibbons, Asian elephants, Pygmy elephant (in Kalimantan) and the Sumatran Tiger (in Sumatra).

There are a number of villages on the border of the Gunung Leuser National Park with accommodation and where you can hire a qualified guide to take you jungle trekking, including Bukit Lawang, Tangkahan and Ketembe.

The easiest to get to is Bukit Lawang, which is around 2 hours drive from Medan, the capital of North Sumatra. Bukit Lawang has been a popular travel destination for over 20 years as was the first location in Sumatra to have an Orangutan rehabilitation centre which reintroduced Orangutans that had been kept as pets, back into the wild. The rehabilitation centre no longer rehabilitates orang-utan back into the wild as there is now a full concentration of the animals in the National Park. They still operate the Orangutan centre and have daily feedings twice a day, for the semi-wild orang-utans to come back to get a free feed, incase they are unable to find their own food in the wild.

Bukit Lawang has a good selection of accommodation ranging from very cheap accommodation to the top of the range Jungle Inn (still don’t expect 5 star!! No air-conditioning, no hot water).

Most people that trek from Bukit Lawang either go for a day trek or do an overnight trek where you camp in the jungle overnight and return back to Bukit Lawang by rafting down the Bohorok River (this is not your traditional white water rafts but a bunch of truck inner tube tires strung together, very basic but lots of fun).

You can choose to do longer jungle treks, 2, 3 or more nights in the jungle. One of the most challenging jungle trek is from Bukit Lawang to Tangkahan which is a 4 – 5 night jungle trek.

Tangkahan is not so difficult to get to, it just takes around double the time to get to compared to Bukit Lawang. You also leave from Medan and have the option of taking the local bus which can take 5 or more hours to get to Tangkahan or you can hire a car which will take between 4 – 4.5 hours. You can also get a 4WD from Bukit Lawang to Tangkahan which takes around 2.5 hours.

Tangkahan is becoming a popular tourist destination due to the Elephant camp. Here they house a group of Elephants which are used to patrol the jungle for illegal activities. To raise money for the operations, they allow tourists to take a short jungle trek riding on the back of the elephants. You can also arrange a jungle trek on foot (without the elephants) from Tangkahan, into the jungle to search for wild orang-utan and the other amazing animals found in Gunung Leuser National Park.

Ketembe is a village located right over on other side of the Gunung Lesuer National Park from where Bukit Lawang and Tangkahan are.

There are a few small guesthouses in Ketembe where you can stay and each guesthouse have trekking guides who can take you into the jungle. The orang-utan found around the Ketembe area are true wild animals, compared to the semi-wild found at Bukit Lawang.

Off the west coast of Sumatra are the Mentawi Islands which are well known as a destination for surfing though the interior of the islands have some of the lushest rainforests which offer some difficult trekking conditions.

The number 1 location for jungle trekking in Kalimantan is within the Tanjung Puting National Park in Central Kalimantan. There is accommodation found at Camp Leakey. You need to get a boat into the National Park from the small town of Kumai. The Borneo Orangutan are the main attraction within the Tanjung Puting National Park. You will also find the Proboscis Monkey (Long nose monkey) which is only found in Borneo (see our article about the Proboscis Monkey).

The trekking in the Tanjung Puting National Park is not just a stroll in the jungle. The trekking here is some of the most difficult as alot of the jungle is made up of swamp areas which at times you will have to trek through water at waist deep!

To get to Kumai, you can fly from Jakarta to Pangkalabun in Central Kalimantan and then it is around 30 minutes drive to Kumai.

You can also get a flight from Banjarmasin in South Kalimantan to Pangkalabun.

To get to Samarinda you can fly from Jakarta to Balikpapan and then take a public bus to Samarinda.

In the province of South Kalimantan is home to the Meratus Mountains running north to south, intersects South Kalimantan in half. There is still lots of virgin jungle though you will also trek through  Dayak farms (Dayak are one of the local indigenous people of Borneo). To get to the Meratus Mountains from Banjarmisin you can take a bus which takes almost 4 hours or you can take a river cruise down the Mahakam River.

West Papua is the furthest most easterly area of Indonesia. Bordering Papua New Guinea, West Papua’s central highlands offers some amazing and difficult jungle trekking. The Balien Valley has become the most popular area for jungle trekking. There are still tribes of people (The Dani people) who live in the Balien Valley, still dependant on traditional stone and wood tools.

Most people think of Bali as a beach holiday destination. It definitely is the number 1 holiday destination if you want to lay on the beach or enjoy the many water sports available. There are some internal areas of Bali which has lush jungle and forested areas.

On the island of Lombok, just east of Bali, there are a number of jungle areas which are ideal for jungle trekking. Many people who trek in Lombok aim to trek to the top of Mount Rinjani. The start of the 2 day trek to the top of Rinjani includes a walk through jungle.

If you are not keen to climb to the top of the active volcano Rinjani, then there are other trails through the Rinjani National Park which are suitable for jungle trekking.