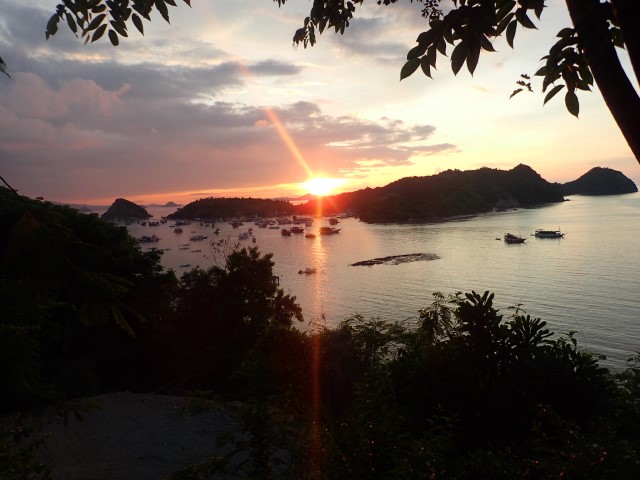 Labuan Bajo is a small town on the western coast of Flores Island in eastern Indonesia. Labuanbajo is the gateway to the amazing Komodo National Park.

Labuan Bajo has a population of around 220,000 people with the majority being Catholic Christians.

The main reason tourists visit Labuan Bajo is to get to the Komodo National Park which is around 1 hour by boat from Labuan Bajo. To get to Komodo Island to see the Komodo Dragons takes around 2.5 hours by slow boat.

The town centre of Labuan Bajo is 1 road that travels along in front of the main harbour where all the tourist boats and fishing boats are moored. This road is lined with restaurants, cafes, convenience stores, travel offices and a whole bunch of scuba dive shops.

The sunsets from Labuan Bajo are spectacular! Being close to the equator the sunsets are usually just after 6pm all year round. There are a few cool bars in Labuan Bajo which have excellent views over the harbour and water to watch to amazing sunsets.

Check out the best bars in Labuan Bajo.

There are other attractions close to Labuan Bajo so if you are staying for more than a few days and want to see more than the Komodo National Park, then it is easy to arrange day trips to some of the local attractions.

There is also an impressive cave system called Batu Cermin Cave which is only 20 minutes drive from Labuan Bajo.

Also check out the Day Trips to Komodo National Park.

Right next to the Labuan Bajo harbour is the main fish markets. Best time to visit the markets is very early morning, 5am – 7am when all the action takes place with the fish being offloaded from the fishing boats and all the restaurant owners and locals coming to buy their fresh fish for the day.

In the evenings, next to the fish markets, an outdoor food market opens up where you can get some of the cheapest seafood meals. The food stalls have all the fresh seafood on display sitting on ice. You can choose the fish or seafood you want and then they will grill up your food and you eat next to the water front. You can get a meal at the Night Food markets for under $5.

Labuan Bajo is still developing their tourist industry to accommodate the increase of visitors to the Komodo National Park. There is still a good choice of hotels though most are still very basic backpacker accommodation.

Check out the best hotels to stay in Labuan Bajo.

Getting to Labuan Bajo

There is a small airport at Labuan Bajo which is only 10 minutes drive from the town centre. There are 3 airlines that fly to Labuan Bajo from Jakarta and Bali.

Flights are not cheap to Labuan Bajo. Indonesia has some of the cheapest airline flights in the world but flights to Labuan Bajo are still quite expensive at around $200 each way or more expensive in peak seasons.

Flight time from Bali to Labuan Bajo is around 1 hour 20 minutes.

Flight time from Jakarta to Labuan Bajo is around 2 hours 25 minutes.

Garuda Indonesia has flights from both Jakarta and Bali to Labuan Bajo. The flights from Bali to Denpasar, Garuda uses the AT72-600 Twin propeller plane which seats around 80 people.

Wings Air is a budget airline, part of the Lion Airline.

Nam Air is a budget airline, park of Sriwijawa Air, has flights from Bali to Labuan Bajo. Nam Air fly here using the Boeing B737-400 jet.