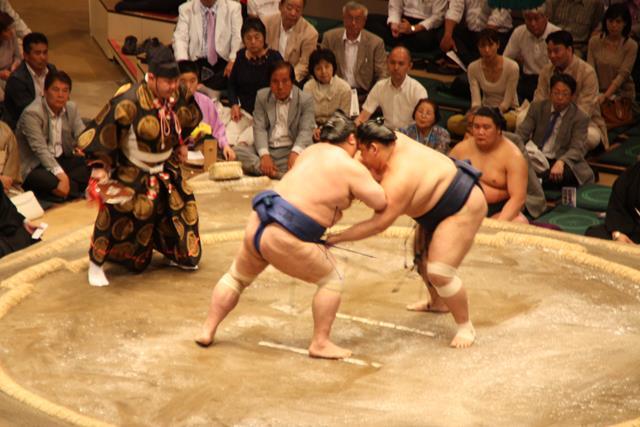 Sumo Wrestling is an ancient Japanese sports and still one of the most popular sports in Japan. There are six Grand Sumo Tournaments in Japan each year, being held in Tokyo, Osaka, Nagoya and Fukuoka.

The schedule of Grand Sumo tournaments and the cities they are in:

The next tournament is in Tokyo from Sunday 8th May 2016 until Sunday 22nd May 2016 held within the Tokyo Ryōgoku Kokugikan Sumo Hall close to the Sumida River. The stadium in Tokyo holds over 11.000 spectators and is full on most days of the 2 week tournament. It is very easy to buy tickets to the Sumo tournament in advance from the official Grand Sumo Tournament website which is in English http://www.sumo.or.jp/en/index

The rules of Sumo Wrestling are fairly simple, you either have to push your opponent out of the rope circle or push them to the ground, knock them off their feet. If both wrestlers fall to the ground then the first one that touches the ground is the looser.

Sumo Wrestling has ancient traditions which are intertwined with the Japanese Shinto Religion. With each match in a Sumo tournament there is more ceremony than the actually wrestling. Before each match each sumo wrestler throws a handfull of salt into the ring to purify it before they start the match. The clay ring that the wrestlers compete onto also has some Shinto significance. The clay ring is built on top of straw bails which is topped with sand (sand is considered purity in Shinto) and then the top coating of clay to hold it all together. Right at the bottom of the straw bails is places some rice, one of the significant foods within the Shinto religion. Above the clay ring is a canopy called a Yakata which is in the design of a roof of a Shinto shrine.

Each Sumo match is very short. I went to the Grand Sumo Tournament in Tokyo last May and I wathed close to 50 matches and the longest went for about 45 seconds. The shortest went for only a few seconds with one Sumo wrestler side stepping the other charging wrestler who nosed planted into the clay ring.

The Sumo wrestlers are treated like rock stars in Japan. At the Tokyo Sumo Stadium you will see people wait out the front of the stadium waiting for the Sumo Wrestlers to arrive or leave so they can get a photo with their Sumo idols.

Sumo Wrestling is definitely something you should go along to see for yourself. Each day of the Sumo Tournaments start at 10am and go through to 6pm. I got to the tornament at around 12pm and stayed until 6pm. The stadium is packed by late afternoon when the largest and most important Sumo Wrestlers are wrestling.

Check out more articles about Tokyo

Check out more articles about Japan