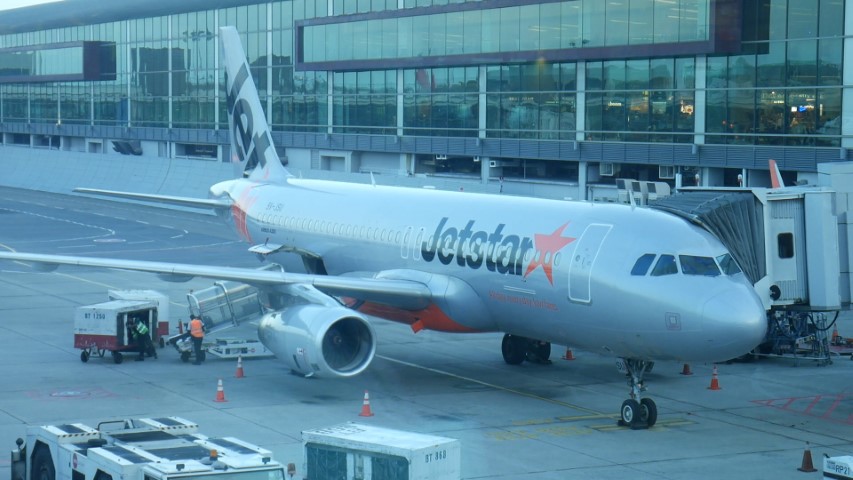 This was a connecting flight with Jetstar Asia. My trip began in Jakarta, flying to Singapore on Jetstar Asia. I had checked in my luggage for both flights through to Phnom Penh so there is no check-in or collecting my luggage at Singapore airport.

My flight from Singapore arrived just over 1 hour before my flight to Phnom Penh so I just had a little bit of time to roam around the massive Singapore Changi Airport.

Jetstar Asia is based in Singapore, flying to 23 destinations around Asia. They have 18 Airbus A320’s as their entire fleet. All their planes seat 180 with only economy class.

Jetstar Asia has 2 direct flights from Singapore to Phnom Penh each day.

For a budget airline, 29 inches is about standard. I am 187cm tall and there was still a bit of room between my knees and the seat in front, and I was able to stretch my legs out under the seat in front.

Food on the plane

Again being a budget airline, there is no complimentary food served on this flight or any other Jetstar Asia flight. There is a food menu in the seat pocket with a range of food you can purchase during the flight. You can also pre-order food when you book your ticket via the Jetstar Asia website.

I had pre-ordered the Singapore Hainanese Chicken Rice seat meal which comes with a drink and dessert for S$16. After take-off the crew come around and hand out the pre-ordered food first.

The tub of chocolate ice-cream was a pleasant surprise too. A very tasty ice-cream with a rich chocolate flavour.

See our video for a Food Review on Jetstar Asia

This is just a short flight of 1 hour and 55 minutes. Apart from being greeted and the food being handed out, there is not much more than crew do on this flight. I did find all the crew pleasant, the crew greeted me when I came on board and said goodbye as I was leaving, both times with a pleasant smile.

Although it is a relatively short flight, after take-off from Singapore it was dark soon, so there was not much to see out the window of the plane until we started descending into Phnom Penh. I would suggest to bring a book or some entertainment on your phone or tablet.

I had previously flown between Singapore and Phnom Penh with Silk Air which is a full service airline, with food included and entertainment I was not so impressed with the food on Silk Air. With this Jetstar flight being much cheaper than the Silk Air ticket cost, I would definitely choose to fly with Jetstar Asia again. A budget airline done well!

Check out the Silk Air Singapore to Phnom Penh review