Palawan Island – Best Island to visit in the Philippines 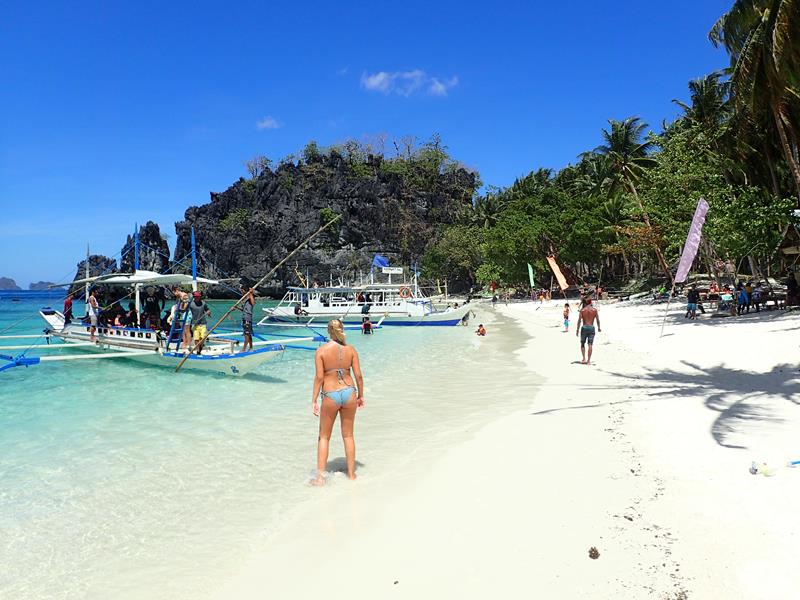 Palawan Island is a must visit place in the Philippines. Just 1 hour flight from Manila or Cebu to Puerto Princesa or to El Nido and you are on the most beautiful island of the Philippines.

Palawan is quite a large island and traveling around can be a bit slow but the travel is well worth the effort.

El Nido in the north is the number 1 place to visit. You can fly to El Nido direct from Manila, Cebu City or Caticlan Airport (Boracay) on AirSwift’s small twin prop planes. If you prefer to fly in a larger jet plane then you have to fly to Puerto Princesa and then it is around a 5 hour car or van ride up to El Nido. Or if you drive up from Sabang Beach then it will take around 4 hours. If you do fly into Puerto Princesa plan to travel to Sabang Beach first before heading up to El Nido.

El Nido is one of the most stunning places I have ever visited. The scenery around El Nido is spectacular with large blue water lagoons, huge limestone rocks jutting up from the sea, beautiful white sand beaches and small tropical islands scattered around the area.

The town of El Nido is located along a small beach that stretches about 2 kilometers. There are loads of hotels, restaurants, coffeeshops and some good nightlife in the town. The nightlife is not wild but there are a few nice beach clubs and bars with live music that are open to early in the morning.

The scuba diving around El Nido is fantastic! There are loads of scuba shops in the town that organise boat trips out to all the dive sites. There are also boat trips that go out to visit the lagoons and beaches of El Nido.

Read more about the Lagoons of El Nido.

Read more about the Beaches of El Nido.

See more of the Highlights of El Nido

Sabang Beach is located 2 hours drive from Puerto Princesa. A long stretch of white sandy beach, Sabang Beach is really worth a visit and stay for a few days. There are loads of cheap accommodation at Sabang as well as some high end beach resorts.

From Sabang Beach you can do a very easy day trip to the underwater river caves. There are also boat trips from Sabang Beach to go for snorkeling or scuba diving close to the near by islands.

Read more about the Highlights of Sabang Beach Palawan

Puerto Princesa is the capital city of Palawan Island and is a very busy town. There is not much of interest in the town of Puerto Princesa but there are some tourist attractions close by like Sabang Beach and underground river caves.

There are loads of restaurants located within Puerto Princesa town which serve a good range of Filipino food and Western food at very cheap prices. There are also a few bars and nightclubs in the town which are open until late.

If you are traveling through Puerto Princesa and looking for a nice beach resort to relax in, then I can highly recommend the Princesa Garden Resort and Spa.

Getting to Palawan Island

The easiest way to get to Palawan Island is to fly. There is a choice of airlines and you can either fly into Puerto Princesa or direct to El Nido.

Philippines Airlines have direct flights from both Manila and Cebu City to Puerto Princesa.

Philippines AirAsia have direct flights from Manila and Cebu Pacific to Puerto Princesa.

AirSwift is the only airline that flies direct to El Nido. El Nido airport is only a small airport so unable to handle the large jets. AirSwift operate small twin propeller planes. Airswift have direct flights to El Nido from Manila, Cebu City and from Caticlan Airport (Boracay).