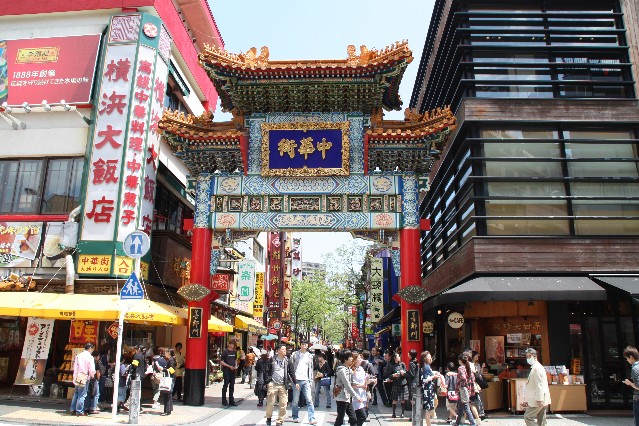 Yokohama was the first place that foreigners were allowed to settle in Japan, after they opened their borders in 1859. The Chinese immigrants settled in an area just 500 meters from the harbour which is now know as Yokohama Chinatown. Chinatown in Yokohama takes up a large area of around 10 blocks with lots of small streets and lane ways. Yokohama Chinatown is the largest Chinatown in Asia and one of the largest in the world.

The second Chinese Temple at Yokohama Chinatown is called Kwan Tai Temple, located on the corner of Kwan Tai Street and Chuzan Ro, close to the centre of Yokohama Chinatown. The temple enshrines the deity Kwan Tai who was a General in the Chinese Imperial Army around 200AD.

Unless you have no money, there is no excuse to go hungry in Chinatown Yokohama. There are so many Chinese restaurants in Chinatown serving every type of Chinese cuisine available. You can get North China cuisine including Peking Duck, Shanghai dumplings, Chinese noodle soups, Cantonese food including Yum Cha / Dim Sum as well as some of the best spicy Sichuan cuisine or just your favourite Chinese meal like sweet and sour pork. Even if you are staying in Tokyo it is worth getting on a train for the 45 minute train ride to get good authentic Chinese food at a very reasonable price. Even with the train fare, with lunch or dinner, it will probably still be cheaper and better than going to a Chinese restaurant in Tokyo.

As well as the hundreds of Chinese restaurants in Chinatown there are also plenty of street vendors selling food like BBQ pork buns, steam dumplings or there are many people selling roasted chestnuts.

Just 500 meters walk from Yokohama Chinatown is Yamashita Park which is located on the Yokohama harbour front.

How to get to Yokohama Chinatown

Once you arrive at Yokohama JR Train Station, change to the Negishi Line on platforms 3/4. Get a train from here to Ishikawacho. It is only 3 stops from Yokohama to Ishikawacho station, takes around 7 minutes.

Once you arrive at Ishikawacho Station, take the North Exit and Chinatown is around 5 minutes walk from the station. Generally you can follow the crowd as many people are going to Chinatown.

Check out the location of Yokohama Chinatown