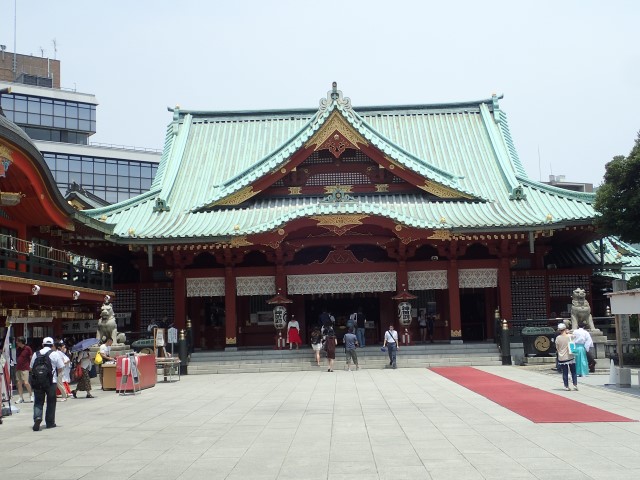 Kanda Shinto Shrine (Kanda Jinja) is popularly called Kanda Myojin located not far from Akihabara in Tokyo. The deities enshrined at Kanda Myojin are the guardian deities for the 108 Tokyo neighborhoods including Kanda, Nihombashi, Akihabara, Ohte-Maruouchi, the Old Kanda Market and the Tsukiji Fish Market.

Kanda Myojin Shrine dates back to 730 AD which makes the shrine one of the oldest in Tokyo. Kanda Myojin Shrine was destroyed in the Great Kanto Earthquake in 1923 after which the shrine was rebuilt. The shrine also suffered sever damage during the fire bombing of Tokyo in 1945 at the end of World War II. After this damage the shrine was restored in the style dating back to the Edo period including the rebuilding of the large front Zuishin Gates which is primarily made from wood and painted in the bright red colours.

Shinto is a Japanese religion, a belief born out of the lives of Japanese people. The Shinto shrines are a place to enshrine and worship its deities of the Shinto religion.

Various seasonal festivals are held at Kanda Myojin including the most important festival called the Kanda Matsuri which is held every 2 years in May. The Kanda Matsuri festival dates back to the Edo period and sees worshippers from the surrounding Tokyo area come to the shrine to see the elobartely designed floats carried through the streets leading up to the shrine, purifying and blessing the area and worshippers.

The main gateway located at every entrance of a Shinto shrine are called ‘torii’. The torii is a symbolic structure of the shrine. When you pass through the torii you should lightly bow to show your respect to the holy grounds you are about to enter.

Right infront of the main temple building are 2 statues of a sacred beast like a lion called the ‘Komainu’. At most Shinto shrines you will find these 2 ‘Komainu’ placed beside the approach of the Shinto shrine. These talisman are there to protect the holy precints from evil. The design of the ‘Komainu’ are different at most Shinto temples but all bear the resemblance of the sacred lion.

Akihabara is an area of Tokyo of interest, so when visiting Kanda Myojin, plan some time to explore the streets of Akihabara. Akihabara is referred to as ‘Electric Town’ as the many small streets around Akihabara are lined with small stores selling electronics, electric components, new and used computers and laptops. Akihabara is also famous for its ‘Maid Cafes’ as well as loads of comic book stores selling ‘Manga’ and ‘Anime’ comic books.

Check out the location of Kanda Myojin Shrine in Tokyo

Check out the Best Shrines and Temples to visit in Tokyo